As if you needed another reason to fall in love with Ryan Gosling, he just upped the ante once again. He recently made an appearance on the Ellen Show where he gushed about his dearly departed pooch, George. 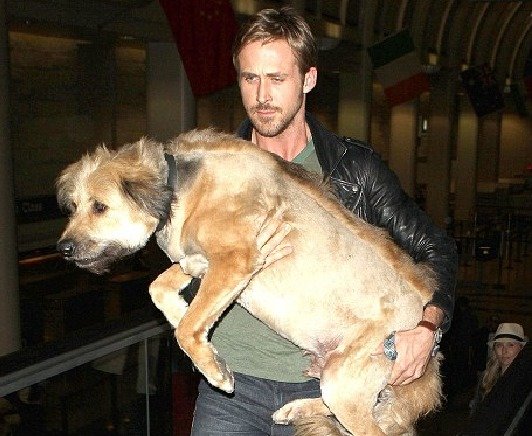 George, a rescue pup that Gosling adopted in his native Canada and who his constant companion on all of his movie sets, was seventeen years old when he passed away last December. But that doesn’t mean that Ryan has forgotten about his late dog. In fact, quite the opposite.

“George, as he started to age, started to look like an aging rock star,” Gosling told Ellen DeGeneres on the show. “He was sorta skinny-fat and he had big hair and, you know, no teeth, open sores, but still sexy.” “He was a good friend to me.” He continued, “It’s funny to say ‘dog’ because I feel like there was something about George where he always, I think he felt like he felt being a dog was beneath him, you know? He would not do tricks. If you wanted him even to sit down, you had to sort of convince him it was in his best interest.”

Oh yeah, and did I mention that RyPy wears George’s dog tags around his neck….all of the time?!? Swoon! Watch the clip below. What do you think of Ryan’s love for his adopted dog? #AdoptDontShop