Although it was widely reported that the consumption of dog meat would be banned in China, the Yulin Dog Meat Festival kicked off yesterday. It is planned to go on for 10 days, even in the face of international backlash. 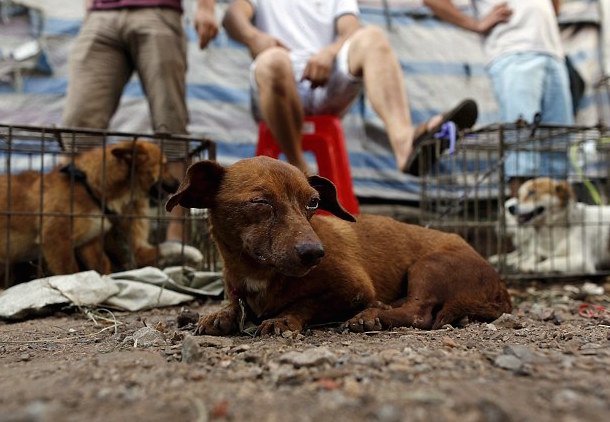 Chinese activists visiting Yulin estimated that 400 dog and 200 cat carcasses were being sold each day this week, ahead of an annual dog meat festival that has taken place since at least 2010.

Event organizers have been accused of stealing dogs, many of them pets, and sticking them in cramped cages only then to be loaded onto trucks to bring to the festival.

If they survive the transport, the dogs then have to endure the unimaginable. They are often beaten, tortured, and blow-torched alive before being consumed for their meat.

In April, the country’s Ministry of Agriculture and Rural Affairs excluded dogs from a list of animals that can be farmed for meat. It was the first time ever that the Chinese government explicitly addressed the consumption of dog meat in an official document.

“With the progress of human civilization and the public’s concern and preference for animal protection, dogs have changed from traditional domestic animals to companion animals,” the government said in a draft proposal translated by HSI.

Dr Peter Li, China policy specialist for Humane Society International, said: “The Yulin authorities may want to keep a closer eye on all the dog meat trade activity by centralising it more or less at one market, possibly because of the increasingly controversial nature of the dog meat business. While some traders told the activists they were doing as much business as possible to make up for lack of sales from January to March due to the coronavirus, others reported that it is now harder to acquire live dogs from outside Guangxi province due to the government’s crackdown on trans-provincial animal transport. Instead of the huge slaughter trucks of previous years bringing in thousands of dogs at a time, they say it is more common now to see small truckloads of mostly locally sourced dogs from nearby towns.”

Experts are also concerned that this festival could trigger a second wave of Covid-19.

Li maintained to Sky News, “We understand that pandemics are caused by a huge concentration of animals of different species – animals with compromised immune systems.” He continued, “A lot of dogs are such animals, in great concentration, and with huge psychological and physical problems. Dog meat is a potential breeding ground for a pandemic.

A survey commissioned by the China Animal Welfare Association in collaboration with Humane Society International in 2017 found 64% of Chinese people want to see an end to the Yulin festival, and 51.7% think the dog meat trade should be banned entirely.