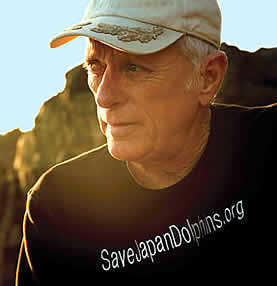 Set your DVR’s for Oprah today because Ric O’Barry, the man behind the Academy Award winning documentary The Cove and who I had the pleasure of interviewing at The Cove’s official pre-Oscars party during Haven360, will be on to discuss the on going problem of dolphins still being killed in Japan. They are brutally slaughtered for their meat, which is laden with mercury, making it extremely unsafe to eat. Ric will also be premiering the new PSA about the senseless dolphin slaughter that many of your favorite celebs have taken part in, including Jennifer Aniston, Courtney Cox, Ben Stiller, Hayden Panettiere, Robin Williams and many others. Here is the PSA:

If you haven’t seen The Cove, you really should-it is an eye opener. Here is the trailer:

Click here to go to the Save Japan Dolphins website to learn more about the Japan dolphin slaughter and how you can help to end the cruelty.

Click here to sign the petition to the Japanese Government calling for an end to the dolphin slaughter.