I had the pleasure of attending the world premiere of Walt Disney Pictures’ Old Dogs at the El Capitan Theater last night in Hollywood. This family comedy centers around perpetual bachelor Charlie, played by real life nice guy John Travolta, and his pal divorcee Dan played by the ridiculously funny Robin Williams. These guys are up for the biggest business deal of their lives at their sports marketing firm. However, a previous quickie marriage (to Vicki played by Kelly Preston) for Dan=7 year old twins who he fathered, but he didn’t know about and now has to suddenly look after. The timing isn’t so great with all of their business dealings, and hilarity ensues as Dan and Charlie try to maneuver through parenthood and land the deal of their dreams. The heartfelt story reinforces what is really important in life, even if it isn’t obvious at first. Sadly, this was the last piece of cinematic art that comedian Bernie Mac participated in before his untimely death at the age of 50 on August 9, 2008.

With all of the recent devastating news surrounding the Travolta family, many of the stars on the Red Carpet had nothing but support for their beloved friends. Actor and DWTS alum Joey Lawrence (who you will see next in the romantic comedy My Mr. Everything shooting after the new year and in which Joey wouldn’t mind sharing the screen with Anne Hathaway or Piper Perabo) starred with John Travolta in 1991’s Chains of Gold and maintained that John is “doing as good as you could expect. If tonight were just about him, he probably wouldn’t be out, but because it is about Ella, he knows he has to be a Dad and be here to support his daughter and I think that is why he is here.” Director Walt Becker deemed Ella Bleu Travolta who was cast as one of the twins, “a star! She is so beautiful and cut from a special cloth like her parents. By day 2, she was suggesting great lines.” Redhead funny guy Seth Green, who acknowledged that working this close with Robin Williams and John Travolta was “incredible,” plays Craig the uber driven sports marketer. Also, he joked with me that his infamous scene in the movie where he is being cuddled by a gorilla while having to sing Air Supply’s “All Out of Love,” was really all about the ladies. He mused, “It wasn’t my first on camera love scene. I just did my best to make her (the gorilla) look beautiful!” Ha! The gorgeous Lori Loughlin who plays Charlie’s love interest-Amanda-remarked that both Robin Williams and John Travolta were both “funny, welcoming, and warm. Really nice men, down to Earth, and so human.”

The one and only Robin Williams photo: caulfield/wire image

And so I saw for myself when I got the opportunity to chat with Williams who was like a warm ray of light mixed with explosive energy, as he made his way down the Red Carpet. At first he regaled me with a story that happened to him at the airport yesterday when a woman walked up to him out of the blue and asked him to be “zany.” Caught off guard he thought, “Lady I’m just standing here. It was like ‘dance for me white boy!'” He also opened up to me about what it was like to be on set with his close friends, the Travoltas. He said, “The greatest thing was to watch John and Kelly watch Ella work. She’s got the chops and it was like John was watching his child hit a home run.” Also in attendance, were Tom Hanks & Rita Wilson, Dax Shepard, Forest Whitaker, Kevin Nealon, rocker Billy Idol, Jenna Elfman who is well into her second pregnancy, and the Travolta family who requested no interviews but graciously posed for photographs. 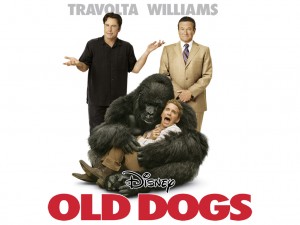