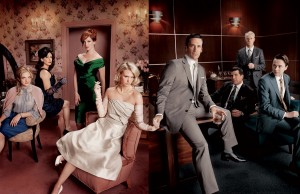 RCR-How are you feeling? Are you nervous? Excited?

MW-I am very nervous about it. I am always nervous. The best case scenario is you have to get up there and give a speech and it’s terrifying. And TV is terrifying! But I am very excited about it. I am thrilled to be nominated and if it is somebody else’s turn to win this award, I will be OK with it. Everyone on the show feels like we did the best work we have done this year so far, so we are thrilled.

RCR-Have you prepared an acceptance speech?

MW-No. But I am sure when I am sitting at that table getting more and more nervous, I will.

RCR-If you could remake any classic TV or movie, what would that be?

RCR-Who do you think has the best Red Carpet style during awards season?

MW-I think the women in our cast-Elizabeth, January, and Christina-they are very impressive. I am always blown away when I see their transformation.

RCR-And what will you be wearing on the Red carpet tomorrow night?

MW-I have a John Varvatos tuxedo that I wore last year and won in and I am going to wear it again. I am superstitious!

RCR-What is your favorite and least favorite part of awards season?

MW-Getting to meet anyone you have ever wanted to meet. You are going to be so close to them that you can say “hi” if you want to. My least favorite is nothing. There is nothing bad about it. If you are lucky enough to be a part of this, enjoy it!