Diamonds may be a girl’s best friend, but laundry is her worst. Many a wool sweater and fitted top have been unwillingly sacrificed to the laundry gods. But fear not! George Kotsiopoulos, a man well versed in the art of laundry since he was in the third grade, is here to help! The E! Fashion Police star has teamed up with P&G Fabric Care brands Tide and Downy for this year’s Washable Fashion initiative. The program aims to make laundry an ally rather than an enemy to your fashion wardrobe. Fashion can and should be washable. So separate your lights and darks, and rejoice! George is here to tell us about the Washable Fashion program, upcoming trends for Fall and even (gasp, already?) Spring, and his favorite celebrity red carpet looks this season. 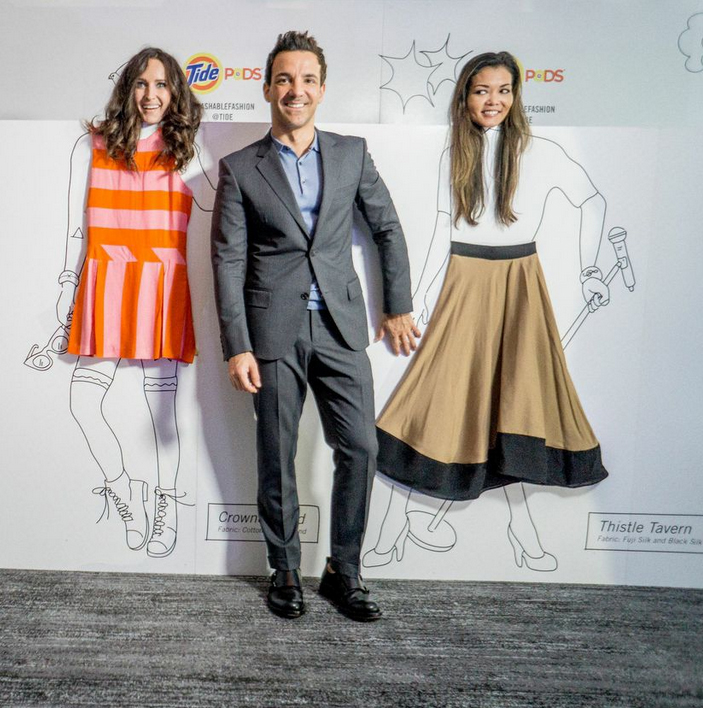 George Kotsiopoulos at the How to Make it in Fashion Conference

RCR: This is a really cool program you’re involved in—Washable Fashion. Sometimes, we think we need to buy the dry cleaning only pieces because they seem more luxe. But tell me what your thoughts are on this Washable Fashion.

GC: I wash so many of my own clothes. I kind of ignore a lot of the labels that say—dry clean only! The truth is, the designers are really just doing that to protect themselves. You know, it’s kind of like the label on a hair dryer that says—do not submerge in water! It’s like—yeah! We’re not idiots. We know not to put the hair dryer in water. So I think it’s really just covering their bases to care for sweaters, for example, I always hand wash those. I think it’s actually more damaging to the fibers if you dry clean them than to just simply hand wash, and just lay them out to dry. And it’s really all about using the right laundry detergent and fabric care.

RCR: So what fall fashion trends are you most excited about?

GC: For fall I’m really into knits. I’ve seen these head to toe knits where there’s pants, sweaters, chunky knits. That’s always fun. And those are washable. And really crazy, psychedelic, techno prints. That’s always fun. Oh, the sixties too. That was a big kind of trend. Mod. And just continuing the cutout trend really.

And then for Spring, oh my god, Spring! We’re already talking about Spring! Less stuffy, loosened-up kind of way of thinking about evening wear. It’s not bohemian and really mermaid dresses in structure. It’s a little more creative and romantic. Spring is great for me because they always kind of regurgitate Spring trends. So gingham is big and that’s something that’s really specific to Spring, obviously. Florals are huge. They’re in every shape and size. Whether they’re really big or really small. Denim is obviously one of our staples. It’s all over the runways. Trims and pants and dresses and jumpsuits. And it’s kind of everything from dark washes to embellished. Fringe is actually something that was happening, I think a couple seasons ago. Now it’s just huge. It’s like a big fringe movement. If I had the opportunity to wear fringe, I would.

RCR: Well you could!

GC: If I were a girl, I would wear a lot of fringe.

RCR: Maybe some strategically placed fringe for you!

RCR: How would you advise women to come into their own and really find their personal style?

GC: I think it’s really just about finding out who admire. Whose fashion you admire, because it gives you whatever muse you might find. Whether it’s Sophia Loren or Audrey Hepburn or Emma Stone or Rihanna,whoever it is. Or the receptionist at your office. Or your best friend, or whoever it is that you can kind of get fashion cues from. And then make them your own. And I think its important to just educate yourself. Reading blogs, knowing what’s out there. And just try new things! I mean, look, sometimes you’re going to fail and you’re going to look stupid, but you learn from those and you try something else! So I think it’s just to not be—to be a little bit fearless. And uh, you know, not worry too much about what everyone else is thinking.

RCR: Are you a fan of tear sheets?

GC: Yeah, sure! Absolutely. I love magazines! I still read magazines. I like ripping out tear sheets. I may throw it away later, but I still like the process of actually reading a magazine.

GC: Oh my gosh! Jennifer Lopez I think looks really good pretty much all the time. I also love Rihanna. I think she is edgy and always pushes the limits, but for some reason she always seems to make it work. I think there’s been too much of a crazy backlash with her. Like, earlier I thought Miley Cyrus was doing a great job and now I think she’s gone a bit overboard. But Rihanna I think is staying true to form and, I just saw her at the amfAR Gala and she was wearing this Tom Ford dress with strategically placed little appliques over her over her breasts. And she still looked elegant and regal. There’s just something about a woman, that she can just have this air of grace to her, which I think that’s really what it all comes down to—being confident in the clothes that you’re wearing. If you feel trashy, then you’re probably going to look trashy. And she clearly did not feel trashy.

RCR: That’s true. She’s one of the few who could actually get away with wearing a bondage piece and having every list out there saying she’s the best dressed and looks amazing. She totally can pull it off.

GC: Totally. So I think she looks really good. You know, Reese Witherspoon I think has been looking really nice.

RCR: Yeah, she’s really kind of found her sexiness I think a little bit too. She’s kind of working it.

GC: Well she’s campaigning for that Oscar! Who else? It’s fun to see Anne Hathaway’s fashion evolve. You know? I think everyone’s trying to look a little bit less Hollywood Glamour, you know what I mean? I think we’ve seen so many mermaid gowns that it’s almost to the point if you show up to an event in a mermaid gown, you look like you just don’t care or you didn’t put any effort for it.

RCR: But then what are your thoughts on Sofia Vergara who always wears a mermaid gown?

GC: Well. In some instances, I think that’s her look. That works for her. She needs to show those curves. Look at someone like Dolly Parton. Now you know Dolly Parton is never going to wear anything different than what she does wear. And that’s fine—that is her look. I’m all about people being an individual. As long as it’s flattering on your body and you’re showing off your assets, I’m all for that. So I don’t have a problem with Sofia always looking the same because, you know, she’s Sofia Vergara!

GC: The more we have people showing up on Fashion Police and bloggers talking about fashion, I think it’s just going to become a given that people are going to care less about what everyone else thinks because they know that no matter what they wear they’re going to get skewered by somebody. So I think that hopefully we’ll get to a point where people just care about how they feel in what they’re wearing and not so much about photographs. Which is fine. You know, there’s plenty of girls that do that. Like Kirsten Dunst or Lena Dunham. I think if they feel beautiful in the moment and in what they’re wearing, they don’t really care what it looks like in photographs. And as a stylist, I think it really should be both. But, you know, ultimately I’ve seen plenty of girls at events that look stunning, absolutely beautiful, the dress is fabulous, it’s great. And then you look at photos of it and, it’s like, oh that didn’t really turn out that well. But you know what? They were happy and they looked beautiful in person. And that’s really what more real women care about, like, real women aren’t being photographed from 360 degree angles. So hopefully we’ll just be seeing more risk-taking.

RCR: How do you feel about Kathy Griffin coming on board on Fashion Police?

GC: Joan practiced what she preached. She knew fashion, she wore fabulous designers, she was always really chic and elegant. You know, ever since the sixties and seventies. The year—the sixties and seventies, not her age! She always looked impeccable, and I think it’ll be hard to find a comic that also understands fashion as well. She coined the phrase, on the red carpet—who are you wearing? She asked that. Those are really big shoes to fill.

GC: It does, but also, the show, it was a comedy show. People think that it was a fashion show—and it was a fashion show, but first and foremost it was a comedy show, and it made us laugh, and we got to look at really cute clothes, and it has a big demographic, You have your women of all ages, and then tons and tons of straight men watched it. I know because they would come up to me in the airports and tell me. And tons of gay men watched it. But I think it had a really big demographic and it was because it was funny. My laugh was 2000% genuine. She had me rolling. I loved her and I miss her a lot.

RCR: What’s the thing you miss most about her?

GC: That’s really hard to say. I saw her every week. We were like family and it was a pleasure and a joy to be on set every week. There was never drama, we all got along, we all really like each other. You kind of miss a little part of your life that’s gone that will never be replaced, unfortunately.

RCR: I know. It is. It’s very sad. And the holidays are right around the corner. Do you have any fun plans?

GC: Just spending it with family in LA for Thanksgiving and with my boyfriend’s family for Christmas and then I do not know. I want to go somewhere hot and sunny for Christmas. But I don’t know where that is yet! I’ll probably make my plans soon.

RCR: Smart man. And what do you want under your tree this year?

GC: I don’t need anything. World peace. Peace on Earth, joy to every man.